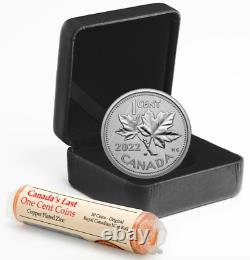 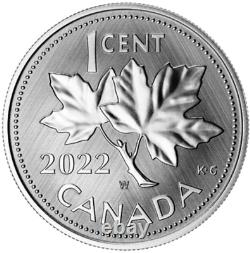 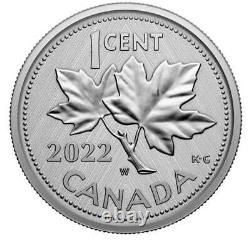 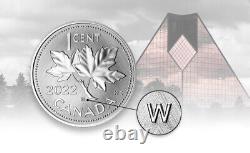 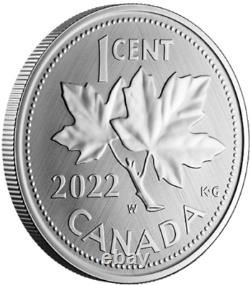 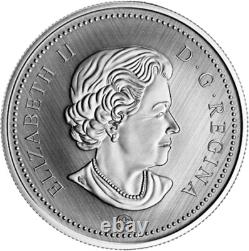 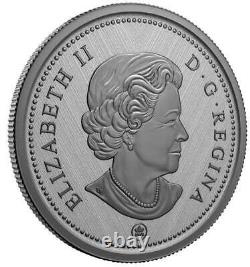 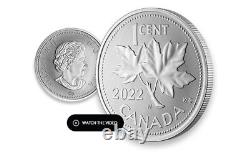 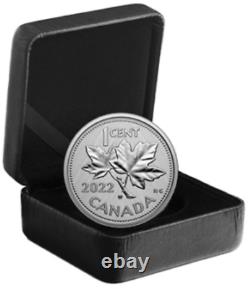 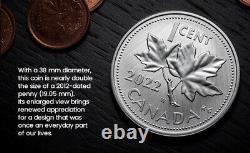 Own this "W" mint mark tribute to Canada's penny! It was 10 years ago, in 2012, that the last Canadian penny was struck at our Winnipeg facility. Now, a decade later, the cent's maple leaf twig design has been brought out of retirement for a limited appearance on this 99.99% pure silver tribute. Struck in a tailored specimen finish, the maple leaves feature a soft satin finish, while the field is filled with angled lines that meet at the centre.

Those lines are a nod to our pyramid-shaped Winnipeg facility where this "W" mint mark coin was struck, and where all our pennies were minted between 1976 and 2012. Relive your memories of the penny with this "struck in Winnipeg" tribute. A TRIBUTE TO THE PENNY! Tailored specimen silver coin pays tribute to Canada's copper-coloured cent on the 10. Anniversary of the last penny struck at our Winnipeg facility.

Like all pennies issued between 1976 and 2012, this 10. Anniversary tribute was struck at our Winnipeg facility. All pennies, this collectible proudly bears a "W" (Winnipeg) mint mark that indicates where it was made-it's the only new addition to the classic design. You've never seen the penny quite like this. Thanks to a tailored specimen finish, G.

Kruger Gray's timeless maple leaves feature a pleasing satin sheen, while the field is filled with angled lines that meet at the centre to form pyramids-a nod to our pyramid-shaped Winnipeg facility! With a 38 mm diameter, this coin is nearly double the size of a 2012-dated penny (19.05 mm). Its enlarged view brings renewed appreciation for a design that was once an everyday part of our lives.

Only 15,000 are available to collectors worldwide. The Royal Canadian Mint certifies all of its collector coins. Struck in a tailored specimen finish (satin relief against a pyramidal line pattern), your coin's reverse is a reproduction of the beloved one-cent circulation design by G. It features two maple leaves on the same twig, as seen on most Canadian pennies issued between 1937 and 2012. The reverse also features a "W" Mint mark signifying the coin was proudly struck at our facility in Winnipeg, Manitoba.

The obverse features the effigy of Her Majesty Queen Elizabeth II by Susanna Blunt. Unlike the other denominations of Canadian circulation coinage, the one-cent coin rarely featured any other design than the one introduced in 1937 (and featured on this coin). The only exception was in 1967, when a rock dove design by Alex Colville temporarily replaced the maple twig to mark the 100. The penny was one of the first "struck in Canada" coins. Two coins were minted during the official opening of our Ottawa facility on January 2, 1908: a 50-cent coin struck by Governor General Early Grey, and a bronze cent struck by his wife, Countess Grey.

Your coin is encapsulated and presented in a Royal Canadian Mint-branded clamshell with a black beauty box. WITHOUT THE CASE, OUTER BOX OR PENNIES.

Items shown in picture is similar to the actual items for sale. Stock Photo - You may get identical items than the actual items shown. Please do not hesitate to ask questions about this or any of our other listings.

Need more scans or pictures, just ask! We have many other Graded; Canadian Gold or Silver coins and cases/COA's in stock. This item is in the category "Coins & Paper Money\Coins: Canada\Commemorative".

The seller is "jw-collectibles" and is located in this country: CA. This item can be shipped to Canada, United States.