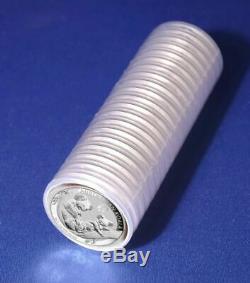 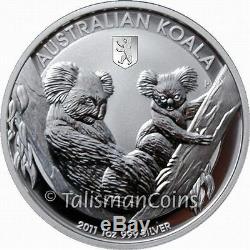 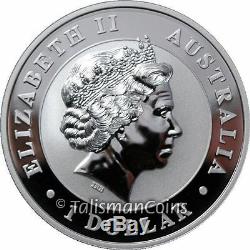 This listing is for a full and original mint roll of 20 Pure Silver Privy-Marked Koala coins! Get a FULL ROLL of this FIRST EVER Privy Marked Silver Koala, with a "Bear-on-Bear" design and a very low mintage limit! The koala is one of the iconic symbols of Australia, made all the more desirable by the Perth Mint's execution of this cute and cuddly critter in pure silver, artistically rendered in a reverse proof finish, in which the design or devices are mirrored. This year, a bright-eyed baby joey watches us from the fork of a gum or eucalyptus tree, while itself being observed by the watchful eye of the mother koala.

This is no ordinary Silver Koala. FIRST EVER privy marked koala! The privy mark takes the form of the city of Berlin Coat of Arms, a heraldic bear rampant on a shield, forming a "Bear on Bear" design! It's no secret that privy marked issues are highly collectible.

Adding to the investment appeal of this unique release is the extremely low mintage limit of only 50,000. Consider that this is only 10% of the mintage limit of the 2011 Kookaburra 1 Ounce Silver coin (and that coin will sell out at that level). This beautiful coin is part of the highly collectible series of Pure Silver Koalas. The obverse design of this series, with the koala bear, changes each year, further enhancing its collectibility. The reverse features a portrait of Queen Elizabeth II of the British Commonwealth, of which Australia is a member.

The Pure Silver Koala has a face value of one dollar and can be difficult to locate, much less in pristine condition, so we advise you to acquire one when you find them. A Most Unusual and Surprising Bear! Despite its appearance, the koala bear isn't really a bear at all, but rather a marsupial. Nonetheless it fascinates us because it's so darn cute - it looks like a living teddy bear!

Appearances can be deceiving here, too, because koalas aren't cuddly, either. They are arboreal (tree-dwelling), so they have very strong, sharp claws for climbing (and their bite can cause injury, as well). Koala bears live nearly their entire lives in the eucalyptus (gum) tree, where they feed almost exclusively on its leaves. They have a very low metabolism for a mammal, so they spend up to 20 hours a day resting and sleeping (and the rest mostly eating). Eucalypt leaves are high in toxic chemicals such as phenols and terpenes, which only the koala has adapted to deal with - the toxins are neutralized in its specialized liver.

Marsupials are unusual, and, many scientists believe, more primitive, mammals. Their best-known characteristic is the pouch for their young, and the koala is no exception. The babies, called joeys, are only a quarter-inch long when born, and enter the world hairless, blind and earless, so the safety of mother koala's pouch is a necessity for its first six months of life. For its second half-year the joey will generally ride on mom's back. You'd think that it couldn't get any more odd than a living stuffed animal that spends its entire life in, and only eats the leaves of, one kind of tree.

If so, you'd be wrong - koalas are among Nature's most unusual and unique creatures. Here's a couple of other oddities about these fascinating fur balls.

Koalas are often thought to be silent, and they are most of the time, but males have a very loud mating call that can be heard for a distance of about one kilometer away during the breeding season! When attacked, koalas may issue a loud cry, which is often likened to that of a human baby.

The koala bear is one of the few mammals (other than primates) that has fingerprints. Koala fingerprints are remarkably similar to human fingerprints - even when viewed with an electron microscope, it can be quite difficult for an expert to distinguish between the two! The designer of the 2011 Koala program vignette is Elise Martinson, who is also the creator of the original artwork for both the coins and the colorful, outer boxes for the Bush Babies series. Elise is an Australian artist, graphic designer, and illustrator who loves animals as you can see from her photo! After studying multimedia design for four years and then working for year and a half as a graphic designer, she became eager to follow her dreams of creating 3D art for games or movies.

Realizing that the limiting factor to 2D and 3D artwork was not software knowledge, but rather the ability to create concepts and accurately render them, she is now dedicated to further cultivating her drawing ability. Elise currently designs both coins and graphic artwork for the Perth Mint, and still hopes to break into the games industry one day as a concept or production artist. Elise was formerly a resident of Melbourne, Victoria but now resides in Perth, Western Australia.

A bright-eyed baby joey watches us from the fork of a gum or eucalyptus tree, while itself being observed by the watchful eye of the mother koala. The Perth Mint "P" mint mark is judiciously located in the bark of the right fork of the tree at the 2:30 position near the rim. The legend 1 OZ 999 SILVER guarantees the weight and purity. The legend AUSTRALIAN KOALA and the date are also indicated.

The coat of arms of the German city of Berlin, including a rampant heraldic bear on a shield, appears above. Her Majesty, Queen Elizabeth II of England, in crowned profile facing right. This portrait, featuring Her Majesty wearing a tiara and pearl earrings, was executed by the sculptor Ian Rank-Broadley. The legend ELIZABETH II, the date of issue and denomination also appear. Each roll of twenty encapsulated Silver Koalas is sealed inside a clear plastic wrap roll, as issued by the Perth Mint of Australia.

The seller is "talismancoins" and is located in Saint Louis, Missouri. This item can be shipped worldwide.