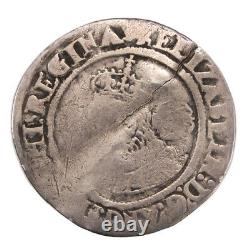 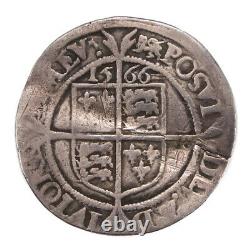 Lion initial mark, long cross over flat-topped shield of arms, date, POSVI DEV. Romantically, some coins were given as love tokens, found bent in half and later straightened. They often fall in half, on straightening, as the silver becomes brittle with age, but if this was the course of this coin, it has survived to tell its tale. At the time this coin was struck, Elizabeth had been on the throne for eight years and was now 33 years old.

A delegation of 60 Lords and commoners met with the queen to urge her to marry and raise the question of succession, her response was uncharacteristically arrogant and haughty apparently, which showed the stress the queen must have felt about this perennial problem. This varies with the age of coin and there are grades in between.

As struck with no traces of wear. Very slight traces of wear, all parts of legend etc present, visible and clear. Some signs of wear on the higher parts of the relief, all parts of legend etc present, but maybe worn. Wear on the coin and parts of legend etc may be missing or not visible. I have been involved in the antiques business since 1971. My career took a leap forward when I joined Bonhams in 1976. Some five years later I became head of the Decorative Arts department. The item "Elizabeth I Silver Sixpence Small Lion Mint Mark 1566" is in sale since Monday, January 11, 2021. This item is in the category "Coins\Coins\British\Hammered (Pre-c. The seller is "eric-knowles-the-hoard" and is located in High Wycombe. This item can be shipped worldwide.